Home » Blog » CoolSculpting Is So Chill

CoolSculpting Is So Chill 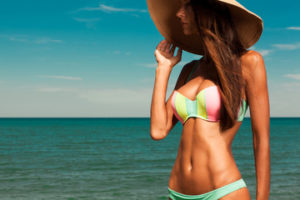 If you think about it with food, it makes sense — fat becomes a solid and freezes at a higher temperature than tissue. Think about those Thanksgiving leftovers. You may eat your turkey sandwich cold, but if you do you surely cut off the congealed fatty areas first.

That’s the idea behind CoolSculpting®. It was discovered that fat cells froze at a higher temperature than the surrounding tissue cells. So you could freeze those cells without harming the adjacent healthy tissue cells. Voila, a multimillion-dollar business was invented!

Dr. Herte offers CoolSculpting® to remove around 20 percent of the fat in the target area.

How does CoolSculpting® work?

Two Harvard scientists invented CoolSculpting® accidentally. They were researching the effects that cold had on the cheeks of kids who ate many popsicles. Kids who ate more popsicles developed dimples in their cheeks. Dimples form where there is the little fat. They put two and two together and came up with CoolSculpting®.

CoolSculpting® freezes the fat cells and leaves the other tissue cells nearby unharmed. Unlike surgery, it doesn’t cause any tissue trauma or inflammation. Over time the body simply sheds the dead fat cells.

Once we identify the target areas, the CoolSculpting® cooling panels are positioned. They apply suction, drawing the skin and underlying fat up to the panel to ensure even contact. Then the cooling is applied to the degree that freezes only the fat cells. Patients at first feel an intense cooling sensation for around six minutes. Then the area numbs and nothing else is felt. Each application takes one hour, and each side of the body is a separate application.

After your treatment, you may have some slight bruising in the treatment areas, simply from the suction pressure. Your results are not immediate, as it takes time for the body to shed the killed fat cells. Your first contour changes will begin to show as early as three weeks after your session, but the contour keeps improving for three full months. In the end, 20 to 25 percent of the fat in the treatment area will be gone. Subsequent treatments on the same area won’t eliminate as much fat as the first session.

Interested in giving those stubborn pockets of fat on your abdomen, flanks, and back the cold shoulder? Call Dr. Herte at 702-732-9600 and ask about CoolSculpting®.